On Saturday we had our showing debut at a Fun show hosted by the facility I board at, and it was a lot of fun!

The ribbons pictured make it look better than it actually was. But it was a good leaning experience for both of us.

The first class we did was Western Horsemanship, which consisted of a pattern and then riding on the rail. The pattern was fairly simple, and is clearly depicted to the left.

Walk to A
Jog to B
Stop at B and turn 360 degrees
Left lead lope circle back to B
Lead change, Right lead lope to C
Back 9 steps
90 degree turn and extended trot to rail.

It actually went pretty good for us, considering we have never actually attempted a pattern before. The interesting part of the class was when we had to walk/trot/lope on the rail. Even though it was already reaching high 80's the horses we all feeling a little spunky. lets just say there wasn't a single "pleasure" style lope in the group.

The next class was Western Pleasure and consisted of only riding on the rail at a Walk/Jog/Extended Trot/Lope. Overall this class did go better for us although our initial lope departure was faster than necessary he did settle in and we actually had a nice collected lope.

Much to my surprise and delight we placed first in both classes.

After the lunch break we did do both Poles and Barrels, We placed in Poles but took a no time in the barrels due to crossing the timer when we spooked at the second barrel.

All in all it was a fun Saturday and a good first show. We even received compliments from the Judge after our two morning classes. She said she could tell Notch was green, but he looked very good for where we were at with training.

There is another show coming up on Sept 12th that we will ride in as well and I'm looking forward to it.
.

I know it's vague but that is what I kept asking myself yesterday while I was riding.

Why in Western riding do we have to use 7ft split reins?? That is just so much leather to keep organized! Am I the only one that finds them awkward to work with??

The only benefit I see is that I can use the end as a whip if need be...

I want to convert. I think he'd look pretty spiffy in a English saddle, don't you think?

So I stumbled upon the below video yesterday, and was very impressed with most of their performance.

If I tried to do that trail course on Notch right now, we would probably look like a bull in a china shop. There would be ground poles kicked all over the place and cones rolling around, not to mention a refusal at the bridge, because we just don't like bridges that are not actually functional. Just a couple weeks ago Notch acted like me asking his to trot over ground poles was equivalent to me asking him to go over a 3 foot jump. But anyways I digress.

The one part I just don't understand with these Western classes is the broken lope. I know what there goal is, they want a nice slow lope that looks peaceful to ride. What they have ended up with is a "gait" that makes it appear that the back legs are broken and dragging behind the horse. Why can't they have a nice collected lope that actually looks comfortable for the horse too? It is this standard in the Western Pleasure based classes that will keep me from ever showing in those areas.

So that is the end of my morning rant. Hope everyone enjoys their weekend!

Stepping out of our comfort zone!

I am a very competitive person...and with that comes the fear of doing something poorly in front of other people. This has led me to shy away from the competing side of riding due to the fear of looking like a fool. Well this morning I decided to try and move past this "stage fright".

Notch and I will be taking part in a 4 week Team Sorting league. We will be working with a random partner to attempt to move 10 cows from one pen to another in numerical order in under 60 seconds. I have not done any cow work with Notch, but he did spend some time around cattle at his previous home.

So next Wednesday is our first night out, so stay tuned for an update!


Something tells me we're not going to look like this lol

So I have figured out what is probably our biggest problem! Notch has a best friend and when he is around his brain turns off and the only thing he wants to do is be with him.

This became clear a couple weeks ago. Notch and I were in the arena by ourselves and everything was going great! (even with the big scary tractors moving around just a few feet away.) He was forward and listening to me, we even had some really nice circles going (which is an accomplishment for us both).

Then his FG (favorite gelding) joined us and suddenly I was riding a crazy giraffe! The only thought that was going through his mind was "must get to friend right now!"

Since that day we have once again ridden completely by ourselves and he was listening very well, and he was also a angel when there were other horse around the arena (although they were not in the arena with us). SO it appears that our main issues arise when his FG is with us. Now that I have figured out the problem I need to figure out how to address it, because riding the crazy giraffe is not my favorite. And this proves he knows what I want him to do, hes just ignoring me when the herd instinct takes over.

Any insights would be very much appreciated!

So I am now a couple years out of school and I still have no idea what I want to do when I "grow up". I wish someone would just fund my hobbies or I could win the lottery, but since I never buy a ticket, that seems unlikely. So for now I will continue this whole work and job thing to fund my riding addiction.

As for Notch, there have been some changes there recently. At the beginning of June Notch moved to a boarding facility near by, and although I miss seeing him out in the pasture at home, I truly believe this change is better for us. The problem with having him at home was the limited riding areas available to us. My neighbor has a small arena that they were kind enough to let us use, but the footing was less than ideal, and did I mention it was small? So now that he's moved we have access to two lovely outdoor areas, a round-pen, and and decent sized indoor arena as well. Additional perk is that there land runs along side a state forest with equestrian trails, so we can trail ride without having to trailer. So now we have no reason not to ride! And after last year we need that!

Also meet the newest member of the family. Nika joined the family in April of 2014, and she will be a 1.5 years in August. 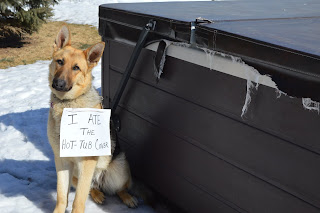 I'm Back! I know I've said that before but this time I really mean it! So I'm working on a new introductory post to get anyone caught up that might still be following this blog! 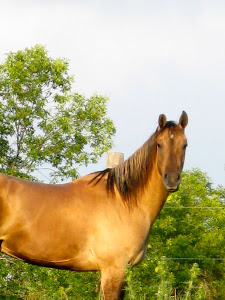